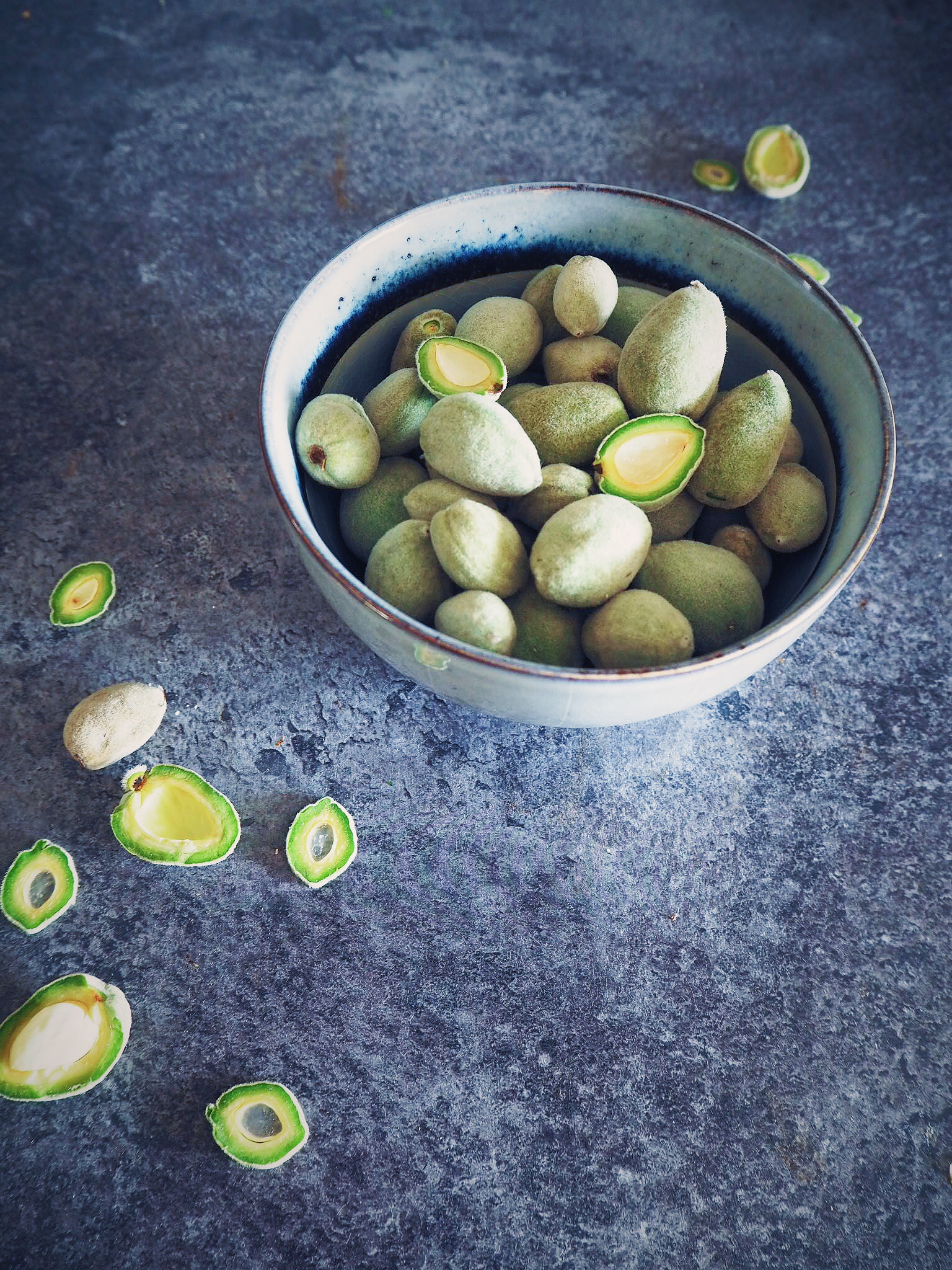 At this time of year, when I’m trailing around the Middle Eastern grocers and delis near my flat, it’s not just the usual olives, pomegranates, and enormous bunches of beautifully fresh mint and parsley that I’m on the look out for, its something altogether more rare. Finally, last week I found what I’d been searching for, a bag of small, furry, green pebbles nestled inconspicuously between the lemons and apricots. These strange looking things are green almonds which are popular throughout the Middle East and other almond-producing countries, like France and Italy.

Green almonds are essentially unripe, picked before the fuzzy green casings can darken and harden to form the shell around the nuts as we know and love them. The shells harden quickly, so the season for these spring almonds lasts a mere matter of weeks – hence my obsessive searching! If you have not tried these before, they have a fresh, vibrant, almost grassy flavour that could not be more spring-like if it tried. However it is the texture that is the most interesting and appealing, with the soft green casing surrounding a translucent, and curiously gelatinous embryonic nut.  If you can find some this young they can be eaten whole, fuzzy green bits and all. 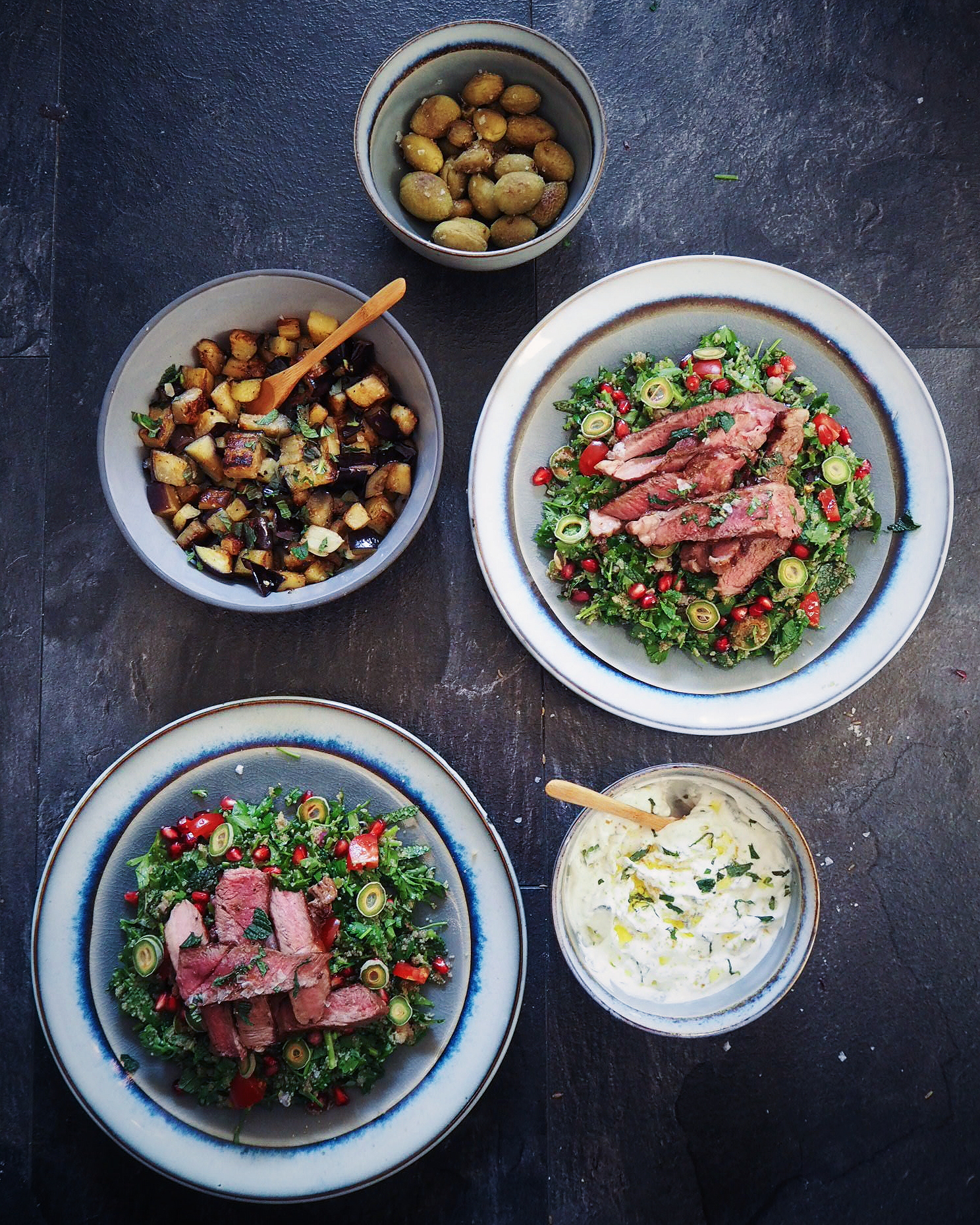 There are endless ways of eating these spring almonds. Over the past week I have sliced them thinly and mixed them through a tabbouleh salad topped with lamb marinated in pomegranate molasses, I have pickled some (like the traditional English pickled walnuts my family makes) but by far my favourite is to toss them quickly in a hot pan and finish with extra-virgin olive oil and  flakes of sea salt. Eaten hot like this the flavour mellows and the gelatinous centre turns to liquid, giving a satisfying pop when you bite into it – a perfect accompaniment to a large glass of chilled white wine. It really is an incomparable eating experience so go and find some before these fuzzy beauties disappear for another year.

Trim the stems off the green almonds, wash and pat dry.

Heat the 30ml olive oil in a pan and add the almonds, toss over a high heat for 2-3 minutes until the skins start to go a golden brown. Add the toasted cumin if using.

Drizzle with the extra-virgin olive oil and sprinkle with salt.

Serves 3-4 as an appetiser

Rinse the bulgar wheat in cold water and place in a bowl. Pour over 100ml of boiling water and a pinch of salt, cover and leave to stand for 7 minutes. Drain any remaining water, fluff with a fork and leave to cool.

Wash the parsley by dunking the whole bunch in ice cold water several times. Remove the coarse end-parts of the stems and, using a sharp knife, roughly chop the parsley (I prefer not to chop it too finely – it adds bite and texture). Wash and pick the mint leaves, roughly chop and combine with the parsley and bulgar wheat in a large bowl.

Add the diced tomatoes and onions to the parsley mix and sprinkle over the ground cumin and coriander. Drizzle over the olive oil and lemon juice, mix well and adjust the seasoning. Scatter over the slivers of green almonds and the pomegranate arils.

Toast the cumin and coriander seeds in a dry pan until fragrant. Grind them in a spice grinder or mortar and pestle until fine.

Combine the molasses, olive oil, spices, and yoghurt and season liberally. Place the mix in a ziplock bag with the lamb and leave to marinade in the fridge for at least 2-3 hours, preferably overnight.

Allow the lamb to come up to room temperature, remove from the bag (leaving them lightly coated in the marinade) and grill on a high heat for 2-3 minutes on each side, until the lamb is brown and lightly charred but still pink and tender inside. Rest for 5 minutes, slice and serve. 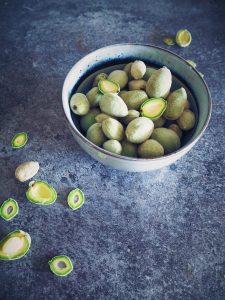