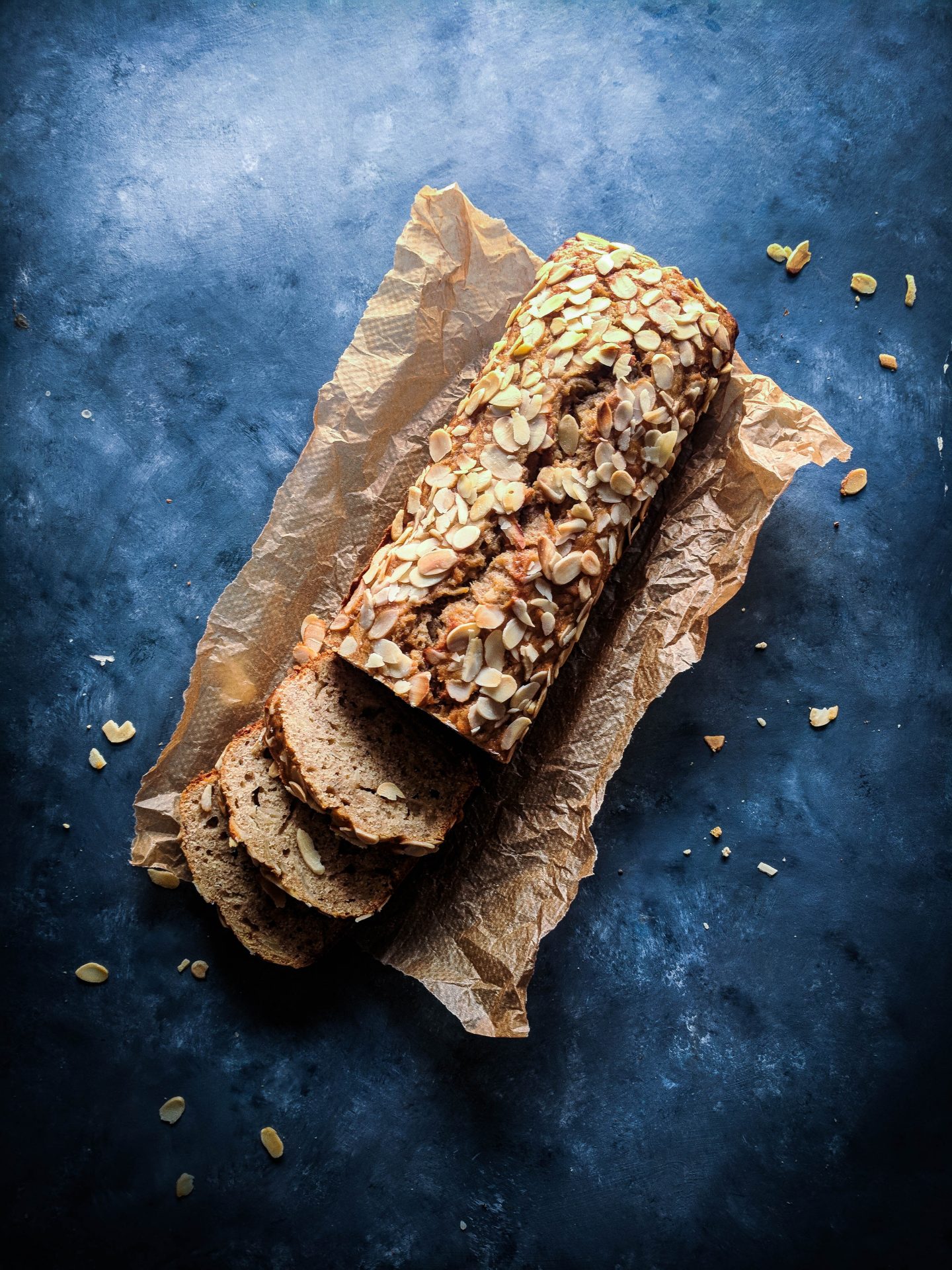 Last week we arrived home after two magical weeks in rural Italy. It was everything we hoped it would be – a dreamy hideaway in the mountains where we could laze around and consume staggering amounts of pasta and sun-drenched vegetables from the local markets, all drizzled (drenched) in olive oil made from the olive trees surrounding the house. I’ll write a full post extolling the joys of Abruzzo and most likely a lengthy and detailed inventory of everything I ate on holiday very soon, bet you can’t wait.

I don’t know about you, but I am shocking at getting back into gear after a holiday. We flew back to the UK after a final sunny hurrah of a weekend in Rome and, true to form, stepped off the plane to biting winds, spitting rain and leaden storm clouds. Nice one England. This, coupled with an inordinately long wait for our baggage to appear, meant that by the time we got to the local shop to stock up all I really wanted to do was charge on home, find a large jumper and bemoan the loss of all things Mediterranean and balmy. So, I threw a few highly random items in a basket, bee-lined the self service tills and grumpily marched homeward.

What I had forgotten is that the next day this year’s season of The Great British Bake Off was starting. I, like most of the nation, can’t get enough of Bake Off. I just think it is the most gloriously merry programme. It is the only reality cooking show I can watch without yelling profanities at the TV and generally developing hernia-inducing anger issues. I have zero interest in unnecessarily mean judges, overly dramatic music, fake tension and arrogant contestants. I am instead enormously into innuendos, jollity and 3 foot tall gingerbread sculptures – a woman of simple tastes, I think you’ll agree. 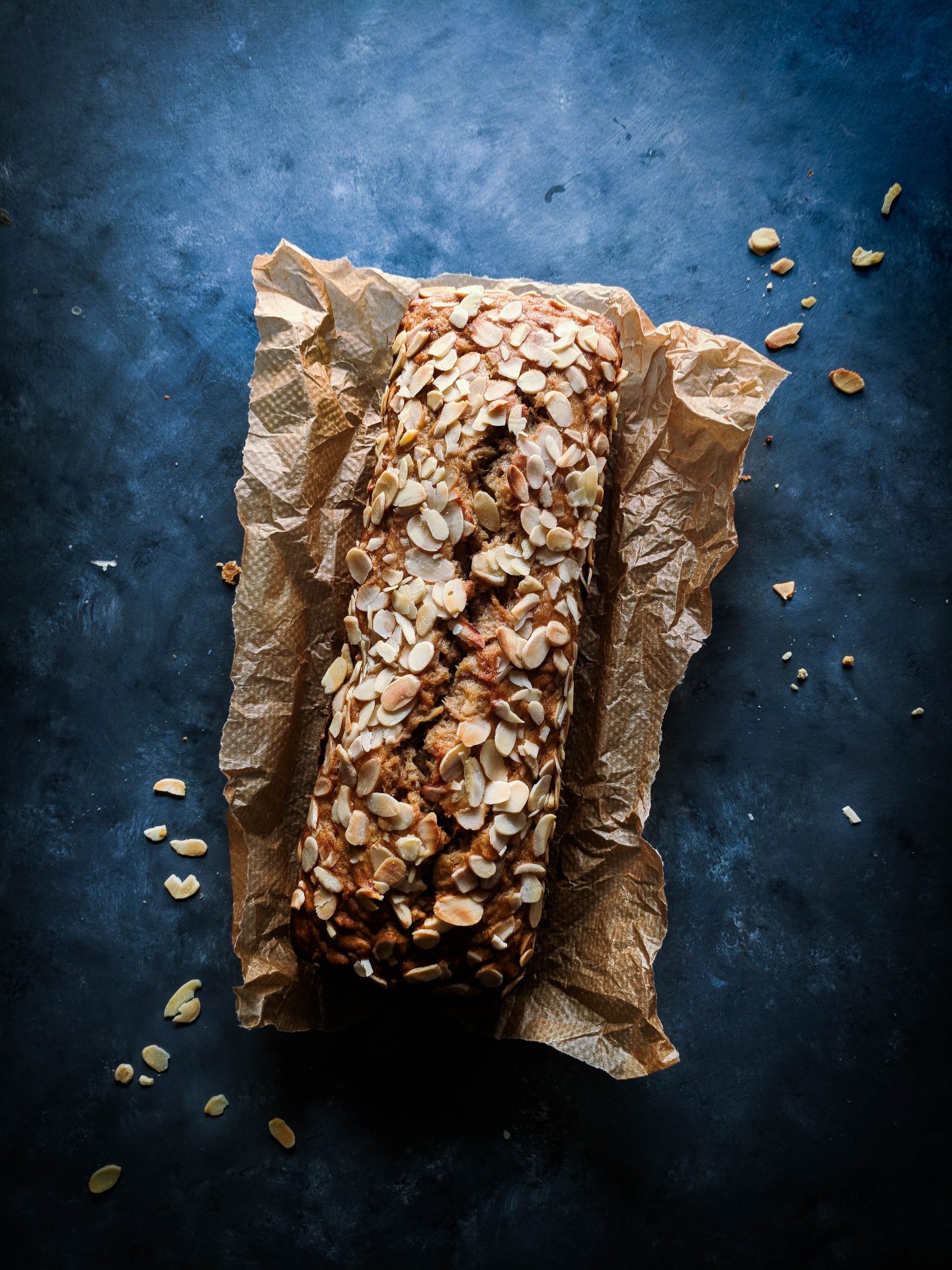 When watching Bake Off it is IMPERATIVE to have a goodly amount of baked fodder to graze on, otherwise a gentle show about cakes rapidly becomes an effective form of torture. So when I woke up the following morning I very much regretted the miserable abandon with which I had trudged around the shops the night before. My fridge was pretty much bare save for a scraping of butter, a few eggs and about 30 middle-aged jars of pickle. Going out to the shops was simply not an option (it was raining a bit and I was in holiday mourning), so instead I raided the cupboards.

The result was a delicious and inadvertently dairy free banana and almond loaf. In lieu of butter I opted for the ubiquitous coconut oil plus a spoonful of peanut butter and the fruit in question came from the bottom drawer of the freezer, which is where all my blackened and overripe bananas go to die. In theory these are for all those times I rustle up some Instagram friendly ‘nice’ cream or make fresh muffins for breakfast. In reality the fruit just keeps stacking up, so I was pretty pleased with myself for making a minor dent in the stockpile. The combination of the bananas and nut butter makes the loaf moist and rich without being overly sweet and the scattering of almonds adds a pleasing crunch. Like all banana bread it is at its very best thickly sliced and slathered in salted butter, which I am fully aware defeats the point of it being dairy free, but there we go. It was exactly what was required for my date with Bake Off, my duvet and the sofa and made me realise that, grumbling aside, it is actually quite good to be home. 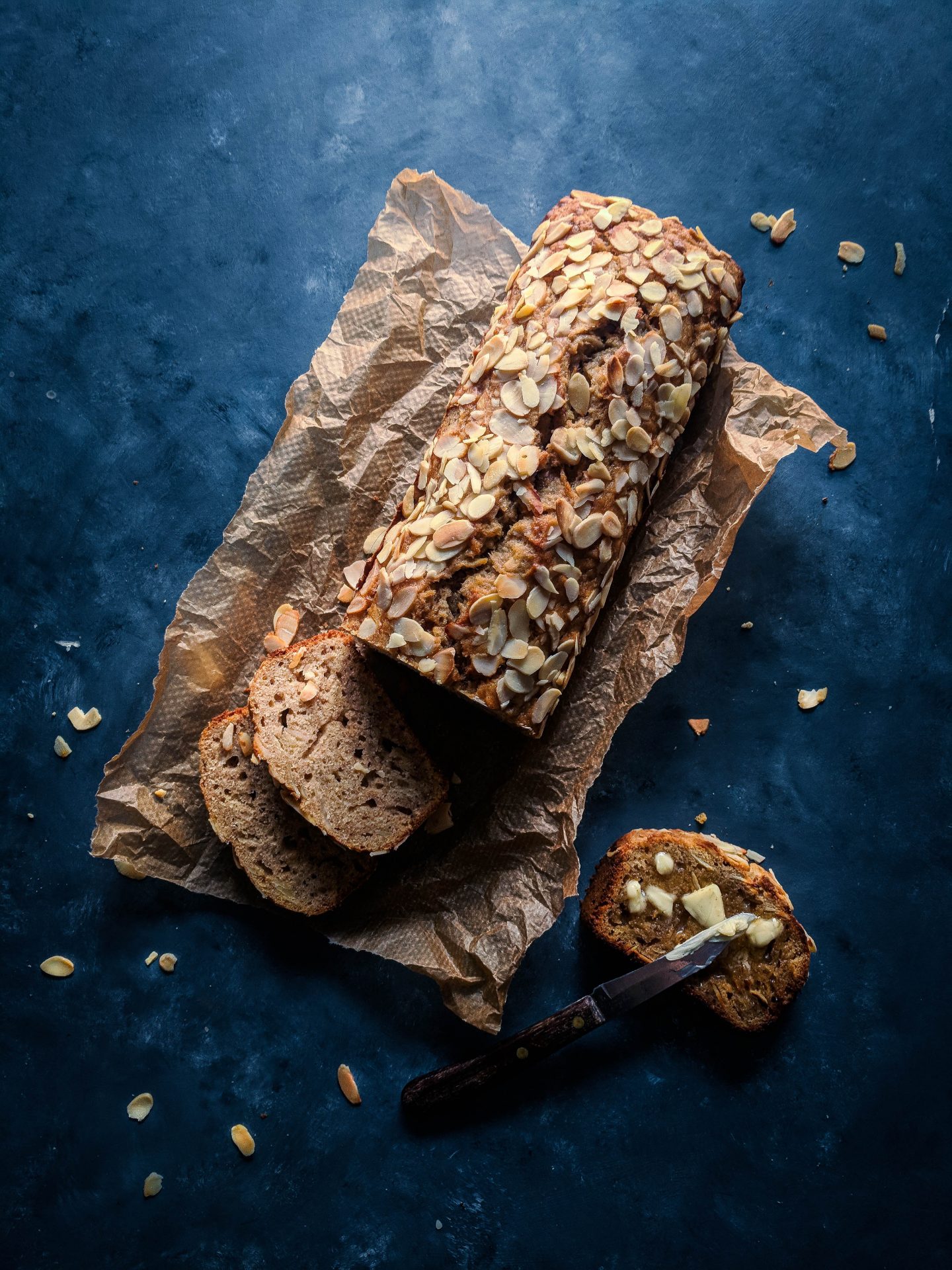 I used peanut butter in my recipe because, unsurprisingly that was what I grabbed first from the cupboard but if you have almond butter that would make a whole lot of sense too!

I used Biona Organic Odourless Coconut Oil in this recipe, as I do for most recipes. It is a great butter substitute as, unlike conventional coconut oils, it doesn’t have a strong coconut taste which can sometimes be a bit overpowering.

If paradoxically smothering a diary-free loaf with butter is not up your street then feel free to use coconut butter or any nut butter.

Place the peeled bananas in a large mixing bowl and, using the back of a fork, mash them until they are a smooth puree. Add the sugar, coconut oil and peanut butter and stir to combine well. Sift the flour and baking powder into the banana mix and fold until just combined.

In a separate clean bowl whisk the egg whites to soft peaks. Using a metal spoon very gently fold the egg whites into the banana cake mix until fully incorporated (be careful not to over mix as it will knock all the air out).

Pour the cake mix into the prepared tin and scatter over the flaked almonds.

Bake for 30-40 minutes checking every 15 minutes or so. If the nuts on top seems to be browning too quickly then cover the tin with foil. The cake is ready when a skewer inserted into the middle of it comes out clean. Remove it from the oven and allow to sit for 5 minutes before taking it out of the tin to finish cooling on a wire rack.

Serve warm slices as they are or toast and slather with salted butter. 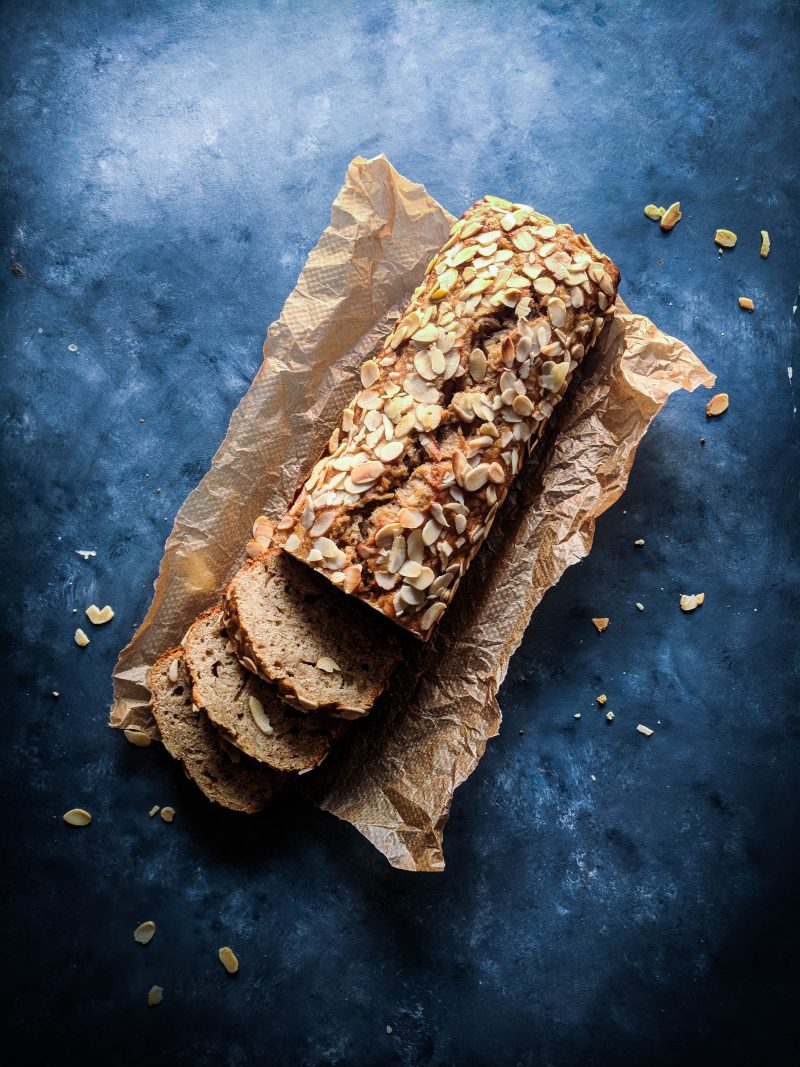