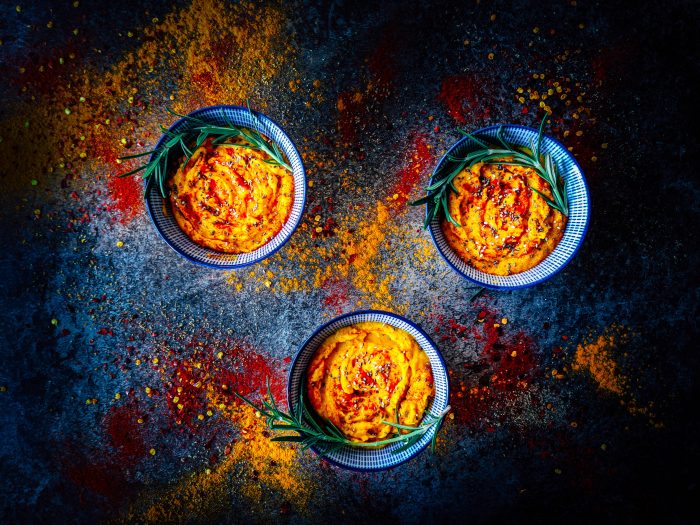 There is something almost mystical about the golden glow of turmeric. This unassuming looking rhizome, ginger’s more vibrant cousin, is a staple of the exotic foods, medicines and dyes of the Far and Near East, Hawaii and Jamaica.  In India it plays an integral role in traditional Ayurvedic medicine and across Asia it is held to have almost magical healing properties, being used to treat everything from open cuts, to diabetes and cancer.

Growing up, turmeric was everywhere at home. It was liberally thrown into every fiery and fragrant curry paste that was pounded together in our big, stone pestle and mortar and I have spent many a happy hour threading golden, turmeric-laced strips of beef and chicken onto soaked bamboo sticks to make classic Malaysian satay (usually turning my fingernails and palms a delightful, Simpsons-esque yellow in the process). 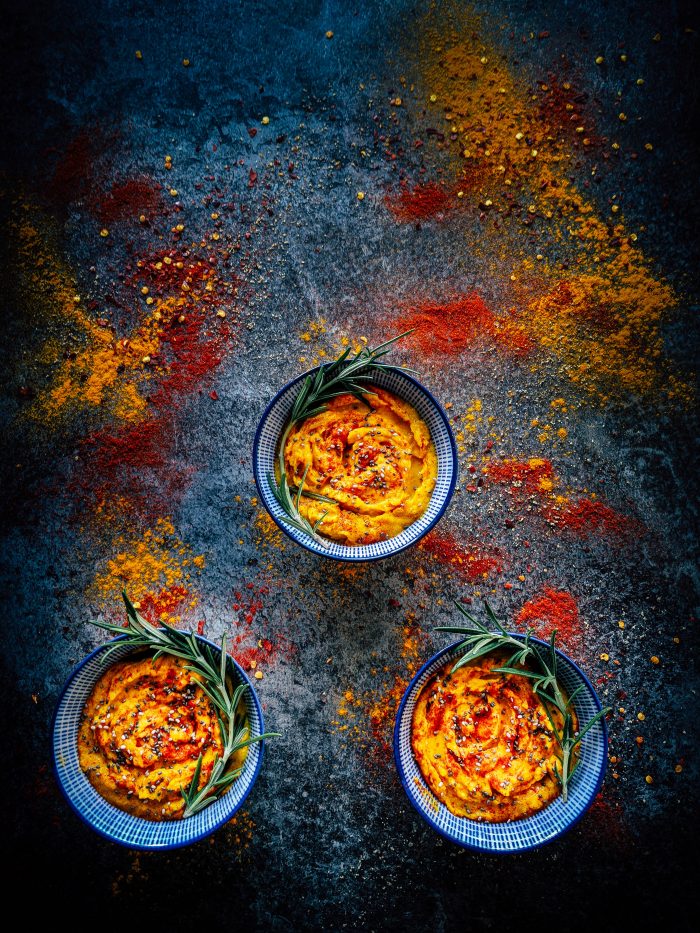 It seems to me that the West has arrived rather late to the party when it comes to this exceptional spice. Our current obsession has followed centuries of general indifference (the Greeks and Romans pretty much ignored the culinary and medicinal uses of what they called ‘Indian saffron’, plumping almost exclusively to use it as a fabric dye). Turmeric is now classed as one of those hallowed ‘superfoods’ and its cult is sweeping the millennial nation, turning our smoothies, soups, teas and coffees a heady shade of tangerine. Walk into most high street coffee shops now and you’ll find some variation of turmeric shot/elixir/latte on offer.

Usually I maintain a relatively lofty degree of scepticism when it comes to the often outrageous claims surrounding these new-fangled superfoods. I sound like such a grumpy old woman, I know, but you try living with a dietitian boyfriend who questions every health claim, superfood or not, that isn’t supported by a vast array of scientific evidence! However, in the case of turmeric, I am more than happy to jump on the golden bandwagon – and bring the opinionated dietitian with me if possible. It helps that there is a rapidly growing body of research which has found that turmeric (or more specifically the compound cucurmin that it contains) does have pretty astonishing antibacterial and anti inflammatory properties, and a few well-regarded scientific studies have even found that it can be effective in the treatment of both osteoarthritis and cancer. I am not going to question this evidence, or frankly the millenia of Ayurvedic know how, so I’ll happily continue using it willy-nilly in my cooking. Health benefits aside, I love the subtle, warm, almost floral pungency of turmeric and it adds an incredible depth of flavour to almost anything. 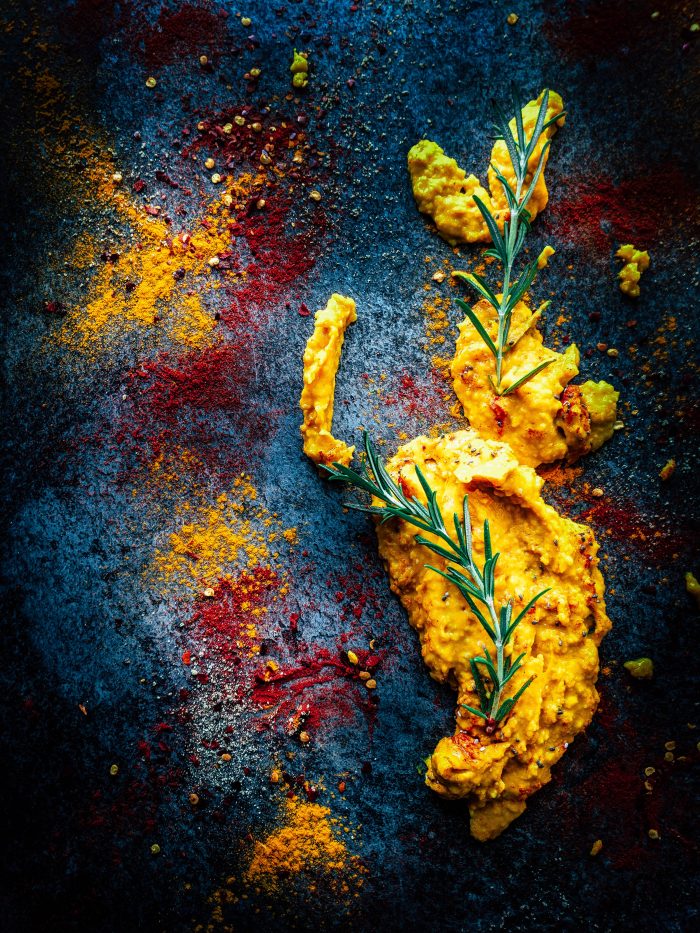 Here is one of my favourite recipes for using both fresh and ground turmeric. This earthy, vibrant hummus is loaded with turmeric, lemon juice and garlic and laced liberally with sweet, smokey Spanish paprika. It really packs a punch and is delicious with warm flat breads, crudites or even (my current obsession) spread relatively thinly on toast, instead of butter, and topped with soft scrambled egg and maybe even an obligatory millennial avocado half! A deliciously different way to start the day that packs a pretty serious, health-giving punch. 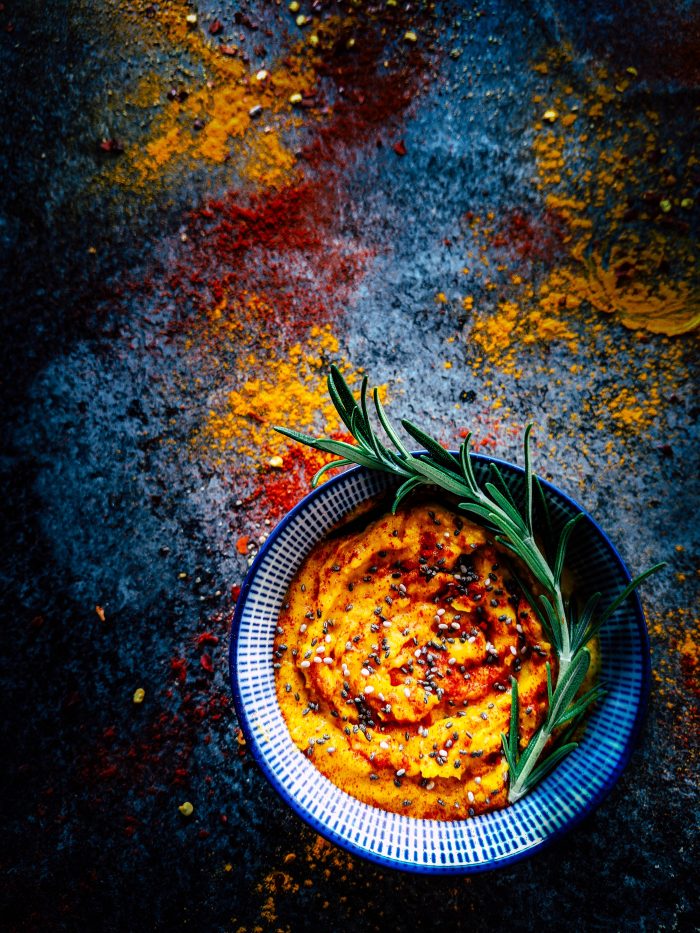 Both fresh and powdered turmeric will stain pretty much anything they come into contact with, so be very careful when cooking with them. One good trick is to cling film a chopping board to work on, and to wear rubber gloves!

There is also significant evidence that the bioavailability of curcumin (how easily it is absorbed by the body) is significantly increased when it is paired with black pepper, so be liberal with that mill!

Place all the ingredients in a food processor and blitz to a coarse puree. Season to taste and dust with a little more smoked paprika. 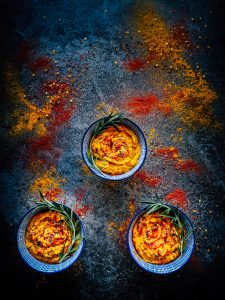